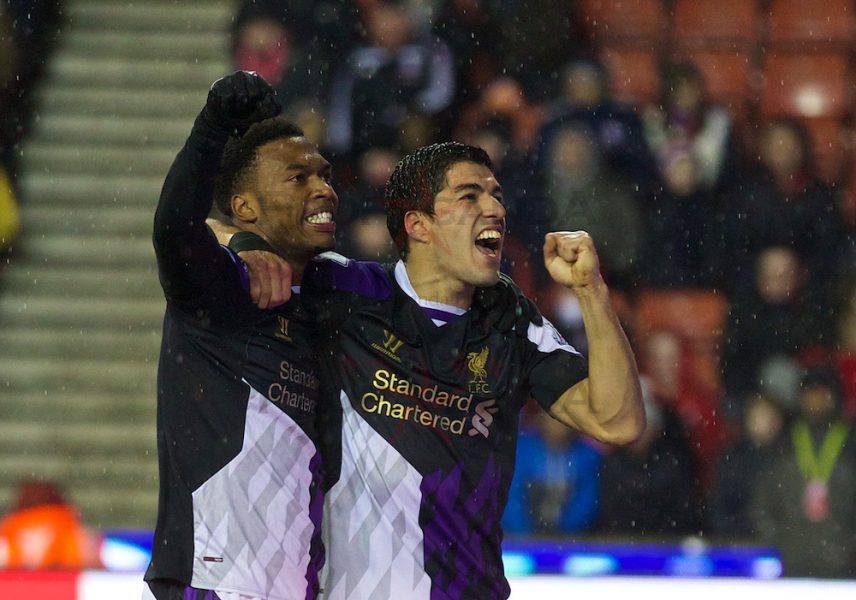 Luis Suarez scored two as Liverpool secured their first win at The Britannia Stadium in The Premier League.

Strike partner Daniel Sturridge also had a cameo in the game scoring one and setting up Suarez’s second and Liverpool’s fourth goal. Whilst Steven Gerrard scored a penalty and Aly Cissokho bagged a deflected goal.

Stoke fought back through Peter Crouch, Charlie Adam and Jon Walters but their efforts were in vain after Sturridge and Suarez run riot in the Potteries.

Mark Hughes made just two changes with Walters and Crouch coming in for Kenwyne Jones and the ineligible Oussama Assaidi. Whilst Brendan Rodgers brought in Kolo Toure for the injured Daniel Agger and Captain Gerrard replaced Iago Aspas. Returnee Sturridge started on the bench.

Stoke replied with their first real chance that came from Charlie Adam’s corner but the hosts couldn’t equalize on the opportunity with Geoff Cameron being pulled back by Martin Skrtel.

The visitors then doubled their lead when Marc Wilson headed the ball to his keeper under pressure but it fell to Luis Suarez, Shawcross ran in but could only get a toe on the ball before the inform striker stabbed the ball past Butland.

Stoke had the chance to put themselves back into the game but Adam’s free kick was tame and failed to beat the first man. The Potters did however pull a goal back through Crouch when Marko Arnautovic’s cross found the former Liverpool player in the area and he headed low into the bottom left corner to score Stoke’s first headed goal this campaign.

Former Anfield favourite Charlie Adam then hit a thunderous left footed drive from the edge of the area that left Simon Mignolet with no chance and put Stoke back on level terms.

Early in the second half Liverpool were awarded for a penalty after Wilson challenged Raheem Sterling in the box, Gerrard stepped up and sent Butland the wrong way to maintain Liverpool’s lead.

Liverpool’s first corner of the game came to nothing as Jordan Henderson fired over the bar. Sturridge then came on for Courinho and set up Suarez for his second of the game and 22nd of the season, after he played him through the Uruguayan hit a well-timed strike hard past a helpless Butland.

Walters almost put Stoke back into the game in the closing stages but his header was straight into the hands of Mignolet. But when the ball fell for Walters on the edge of the area a few minutes later the Evertonian made no mistake striking the ball through the Belgian’s legs to ensure a nervy finish to the game.

But Sturridge completed his return in the 88th minute when Butland failed to clear the ball and ran around Eric Pieters to score his 10th goal of the season.